My first day in Ningbo was a stroke of luck. I was originally supposed to meet a tea farmer who would take me to his fields, but a miscommunication and a misunderstanding of Ningbo geography pushed that back a day. So instead I wandered around Ningbo looking for a tea house. I ended up finding one tucked in a corner of Tianyi square.

The shop was spacious lined with all sorts of various tea wares from porcelain tea cups to clay tea caddies. I asked the lady if she had Rou Gui and after showing me a few I tried one and we began to talk. 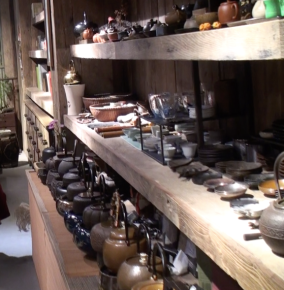 She told me that the shop had been there for 17 years. The owner had learned tea from one of the original students who studied tea academically, a lady who is now 80 years old. The shop strived toward learning and educating others. Besides just selling tea they also give a variety of classes ranging from tea brewing to flower arranging to xiang dao (incense ceremony). She explained they had friends in Taiwan and Japan so they exchanged shared experiences, information, and tea wares. This allowed them to have a wide varierty of knowledge in various forms of tea brewing and arts. She then would use a term that would sum up her general philosophy about tea; she said that all of this was Chinese tea because Chinese tea was “all inclusive”.

We all know that tea started in China. At first it was considered medicine, then drank by the elite few,  then it became popular through out all levels of China in the Tang dynasty. She explained that back then there was no one way of drinking tea. Tea is most popularly known as being put in the powdered form and whipped, in what would later travel to Japan and become matcha. Infact, she said,  people at different levels of society, across  different parts of China, drank it differently. Not everyone drank it in its whipped form. From the bingeing she said, Chinese tea is all inclusive. 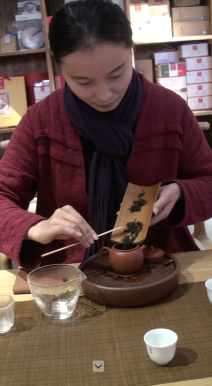 Her philosophy extended to modern day as well. In America the average tea drinker will differentiate mainland China from Taiwan, usually preferring one over the other. She, as you can imagine, did not. When I asked her what she thught of Taiwanese tea, she said that Taiwanese tea was Chinese tea. That Taiwan kept older traditions of Chinese tea and that the brewing styles and philosophies of Taiwan were just part of the complex world of Chinese tea. Her philosophy was one of equality. To her there was no one way of tea brewing that is better than the other, because it was all part of the same family. Much like how a mother loves every child the same, to her you cannot say one tea brewing style is better than the other.

By this point we had drank a Rou Gui and a wild Dian Hong (which I bought and will be in one of the curated gift boxes given to my $100 donors), and she asked me if I would like some food. Expecting a small snack I was greatly surprised when she brought me vegetarian dumpling soup with pickled veggies on the side, made by someone in the back room. After I ate we sat down to drink more tea, but this time her coworker brewed the tea.

The coworker was more formal in his brewing. His philosophy was a closer link between brewing and meditation. His movements were slower and showed a clear effort toward mindfulness. We didn’t talk much because he only spoke Chinese, but he believed that one should brew cross legged because it calmed you and made you more meditative. This began an argument in Chinese between the two of them which even though I could not understand,  made me happy to see tea people arguing about a detail so small yet to them so important.