We woke up early Monday morning around 8 am.  A simple breakfast of balls of dough mixed with chives, the Chinese equivalent to a garlic knot and we went out to pick tea. It was the 27th and the tea had only just started budding.

At Dong Ting, as well as other tea regions, the land is broken up into smaller sections each owned by a farming family. During the time of Mao all of this was government land,  after Mao it was broken up and given to the farmers. The way they broke up the land though seems at random. A given family can have sets of tea bushes in very different parts of the mountain.

Climbing up the mountain you pass patches of tea plants, fruit trees, flowers and small ponds, all coming together to create a small ecosystem which keeps the soil rich and healthy. We started by visiting tea bushes they had at the bottom of the mountain. There were a decent number of trees but it was still early in the season so the plant was not budding much and wasn’t much to pick. Part of the reason early picked teas are more expensive is because they are more rarer. As the season goes on the buds grow in more quantity, but later picked plants are less desired because they are often not the first pluck or have grown past their ideal leaf size and thus don’t contain the same flavor.

We hiked to their second patch of land which was more up the mountain. The path was steep and not very smooth. Rocks, plants and sudden increases in steepness made the climb more difficult. We reached their next patch which had a gergous view over the village and to the lake behind. The west mountain of Dong Ting is on a small island surrounded by Taihu Lake. The plants up here were budding even less and we weren’t up there long before we headed back down. In total I picked 40 grams of tea, Aaron picked 60, and the grandmother picked 200. (She is a real pro). 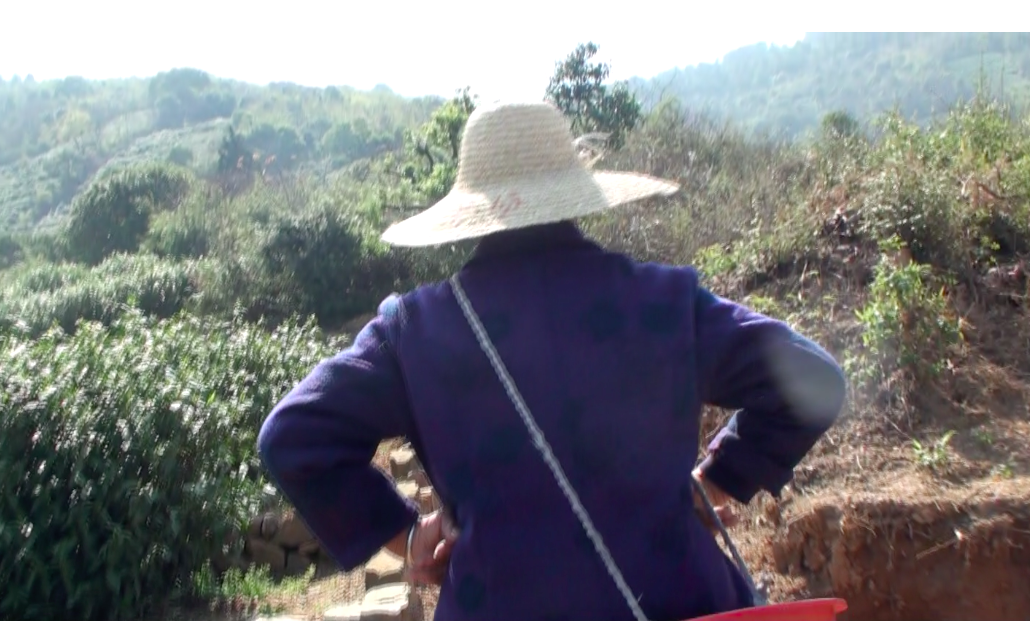 When making Bi Lou Chun you need to use about 600 – 1000 grams of fresh tea leaves. Using less than 800 grams will result in tea that is to broken up in the making process and is often not worth all the effort to produce so little tea. (The leaves loose 3/4ths of the weight during the making due to water leaving the leaf, so 500 grams becomes 125 grams). As we sorted the teas the grandmother went out to pick again.

Bi Luo Chun has a standard picking of one bud and one leaf. The leaf though must be the right size. Too big and the leaf is too old and has no flavor. If the leaf is too small it will break off in the wok and burn. The leaf should be about half the size of the bud to about the same size. The sorting step is done to remove bad leaves from the bud and to keep the bud to as high of a standard as possible. This was another step where everyone else in the family moved a lot faster than me. After the tea was sorted it was ready to be made.

The father is the one who makes tea. He learned from his father, the grandfather, who still lives in the house. He put on his smock and went into one of the older rooms in the house which housed two woks. They had one fueled by log fire and one fueled by gas. When I asked which one they use Aaron said they use the gas one because it is more convenient and only takes one person. The log fire wok takes two people, one to made the tea and the other to tend to the fire. When frying green tea wok tempeture is crucial. For log fires the one cooking the tea must yell commands at the log tender. When using a gas wok, the tea maker can control the wok himself and the tempeture changes are faster. This family only got the gas heated wok four or five years ago and apparently there is no difference in flavor. While I have heard wood fires are better for making tea than gas, I can see where the ability to quickly adjust the tempeture could make the quality improve a lot.

For Bi Lou Chun the whole tea making process happens in the same wok. The leaves hit the wok and there is a sizzling sound and a puff of steam as the water begins to evaporate from the leaf. The father works the leaves in various motions to keep them from clumping up or burning in the high heat. (200c+). This is the step that takes the highest heat. After this the heat is turned down a bit to kill the green. As the father works the leaves, he is constantly adjusting the heat of the fire to keep the wok at the temperature he wants.

As he goes on the leaves begin to get darker and the hairs that grow naturally on the tea leaf begin to turn white and become visible against the dark green color of the leaf. At this point the father begins to roll the tea in a ball under his hand. This, Aaron said, is where the real tea making technique comes in. You want to roll the tea with enough pressure that it will create the curled shape, but not too much pressure that the tea leaves do not turn under your hand and thus burn. After every few turns the father shakes the tea leaves apart to prevent clumping. 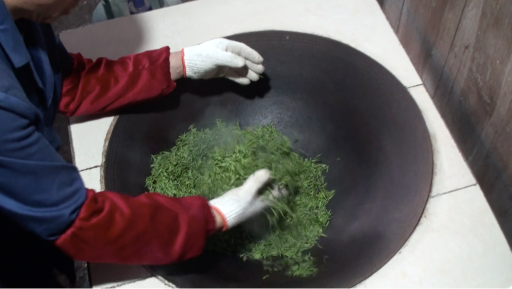 The final step is the real shape making step. The father at this point takes off the work gloves he had been using and goes in with his bare hands. He does this not only because the wok is now at its lowest temperature, but also because this is where he really needs to feel the tea. This is where the tea will be drying out completely and it is important to feel how dry the tea is. If the tea is not dry enough, the retained mostioure will make the tea go bad and give a bad taste (called stinky green in oolong), but if the tea leaves become too dry they will break apart in the wok and won’t make good tea. Making Bi Luo Chun is a constant balancing act. He rests one arm on a pillow and vigoursly rolls the tea in his bare hands. After this the tea is finished. The whole process takes about 45 minutes and produces one of the most famous teas in China 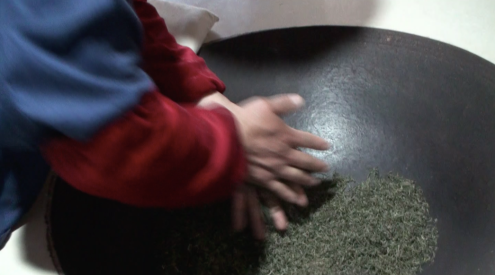 All of this was finished before three o’clock. “So what’s the plan for the rest of the day.” Aaron shrugged.
“No Plan. …. Want to go for a walk?”.