The White Tea of Dian Tou

We sat on in their first room of their house. The room only had one table next to the window where they kept their tea supplies, the rest of the large room was completely empty which was just fine for the 8 year old daughter ridding her bike around in a circle.  My host and I sat next to the window looking out over the sun drying tea and the mountain range beyond. 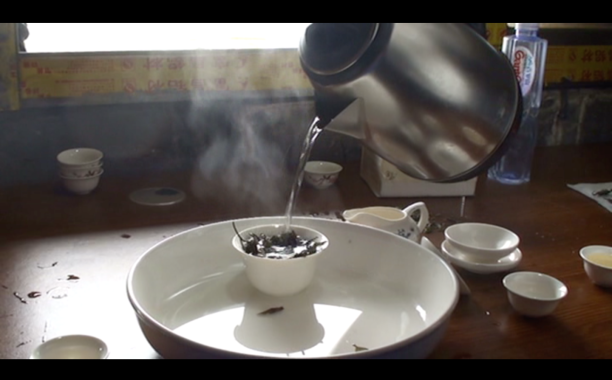 Some body called something from outside and my host, his brother, and his father got up and began moving all the large trays the tea was drying on. They didn’t move them far, just about 10 feet to the left. When I asked he said the father said that the sun was moving and they needed to adjust the position of the tea so that they could match it. In theory I understood this, but in reality I couldn’t even see the sun, it was a cloudy day. “How does your father know? I can’t even see the sun.” I asked. My host just kinda shrugged. “He is old”.  I took that to mean he was experienced. I looked hard for the  difference in sun between the two places but saw none. 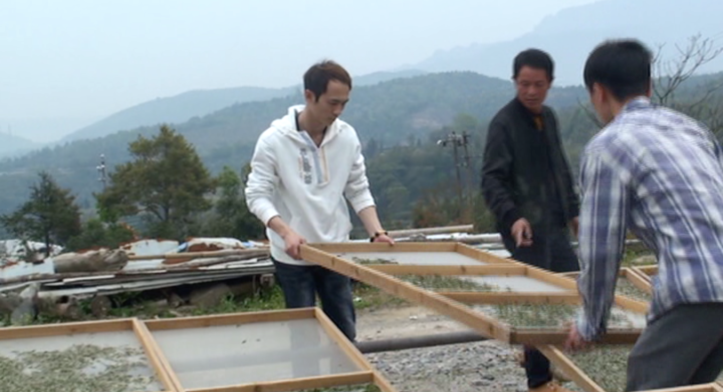 White tea is a tea that is only dried, it is exposed to no high heat. The flavor is soft but very complex. You can read more about white tea in the white tea article. The best white tea comes from Fu Ding in Fujian province.

My host lived in the city of Dian Tuo, outside of Fu Ding. He had a small shop on the main street and his family owned land at the tea fields near by. The drive to his field was up this long winding mountain road. The kind where you have to honk when you reach some bends cause you can’t see if someone is coming on the other side.

We reached his house, small and simple house, and his whole family was already outside casually standing around a set of 12 large trays filled with tea drying. We bent down and he pointed out the different teas. The first was Bai Hao Yin Zhen (silver needle). He pointed out that it a bud and a small leaf. The bud is strong, he said. Next he pointed out Bai Mu Dan. The picking on this was a bud and two leaves, and the but was not as strong. He pointed out that while it was longer it wasn’t as fat. It is the girth of the bud, not the length that is important. “You don’t want a very curved bud” he said. That is a sign of a weak bud. He also makes Shou Mei and Gong Mei, but those are picked later in the season.

Once ounce of Bai Mu Dan

Made from the buds and leaves, the body on this is fuller than the Silver Needle but less complex. Honey sweetness with notes of vegetalness and nuts.

He then brought me to a ware house that you could tell had been built on the side of the house more recently. Inside there were long channels with trays on them. He said that while they were empty now they were used to dry tea when the weather was not good. It took about 55 hours to dry the tea and you had to remove 95% of the moisture for it to be good. “How do you know when the tea is done?” I asked. He said there were a few days to know but one was to listen to feel the tea. He pick a few leaves and rubbed them. You could hear a the leaves cracking and breaking. Then he took one leaf and crushed it between two fingers. The leaf pulverized till there was only dust in his hand. When a tea is fully dried it breaks very quickly and easily. The next day as I passed through funding I stopped in a tea house and witnessed the owner and her friend put their tea through this test, it did not break apart nearly as finely.

He finished by showing me a large pile of finished tea leaves. He said this was his best tea because he was to dry it completely naturally outside, with out needing to bring it inside and use fans. “This is the most natural way, it provides the best flavor. White tea is the most natural tea”

We finished inside and after have a little tea he said to me “Do you want to see the fields?” and with that we were off to see the plants.

This family has two sets of plants. The first is their trimmed tea fields. This is located right behind the house is a small plot of cultivated tea trees. I was at his fields April 6th so Bai Hao Yin Zhen and wild Bai Mu Dan had just finished picking. He showed me the different sizes of buds. This plant had been picked before so the buds had grown back a little smaller. The leaves were also torn up from where the bugs had eaten them away, clearly very pestiside free. “We are very serious about our tea.” He said. “White tea is the most natural tea. You must let it be natural”.

There is an obvious difference in the wild tea trees. For one they are about two to three times as high. While normal white tea trees are groomed to be easy to pick, wild tea trees are unkept and there for grow very tall. At about seven years old the trees were as tall about me (5’11”) and would only grow taller with him. She said that these teas were not picked for many years partially due to the fact that they only bloomed once. While normal buds regrew, the buds on this tree did not. This made it very hard to make tea from this tree since the size of the bud is so important and if the bud becomes too big no good tea can be made. 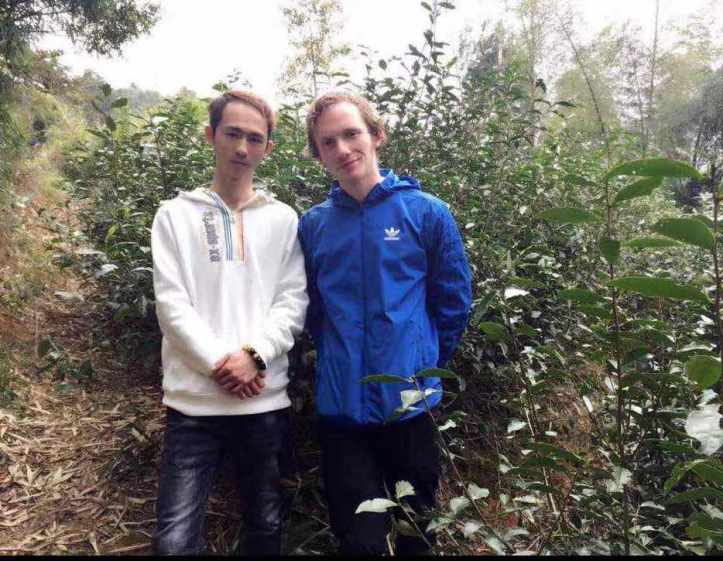 It was an amazing few days. I purchased Bai Mu Dan and Silver Needle. You can purchase them here. https://sweetestdew.wordpress.com/buy-tea/white-tea/

congratulations @konradpociask for being the only person to guess correctly! The tea is Ding Gu Da Fang! 顶谷大方。 With a look and flavor resemblence so close to long jing I'm not surprised most thought it was that, but as Konrad figured out that would have been to easy😜 They say Ding Gu made in this style redates long jing, but I am sceptical. More research will be done. Thanks for playing😁 Sip happy
Contest! Can you name this tea? Comment with your answer below and in 24 hours I will select a winner from those who guessed right. Winner gets 50g of the Qimen red tea. :)