Wuyishan’s downtown is its own little universe of tea. Located in plain sight of the giant cliffs of Zheng Yan, the downtown area (or at least the tea area) is home to hundreds of tea shops and a few hidden tea processing areas. On more than one occasion I have been led by a tea maker from his shop to where he was doing the second or third roasting of tea.

The tea area of wuyishan is a dense center of shops that range from big brands with not good tea to honest farmers with plots in Zheng yan, and everything in between. I have touched on the topic of how to tell which shop is which, but mostly its about luck. That being said I did get lucky this trip. Very lucky.

Let’s rewind a bit. I originally came to Wuyishan with my mother and her partner, he is a tea head so Wuyi Shan was a must. We stayed right outside the downtown area across from my friends shop. (For those traveling to Wuyishan I am more than happy to give you my friends contact). 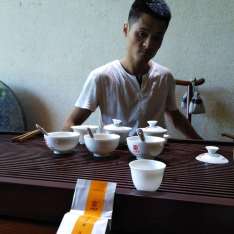 Two time we went into his shop to taste this teas. I suspect he was still roasting some of his teas because a few still seemed light. That being said I see home improvement in his teas. His Huang Guan Yin is more balanced and developed than last year. His Qi Lan this year was also quiet nice. More round and full then previous years. Besides trying teas I did something I almost never do when I go to the tea regions, I went to a tourist spot.

My mom, Ijod, and I went to the scenic area of Wuyi Shan. Three times I have come to Wuyi Shan and not until now did I have any interest in climbing the peaks or seeing the Da Hong Pao Trees. My focus has always been tea when I go to these regions and I always skip anything unrelated. (I lived in Haungshan for a year before I climbed the mountain). That being said it was a nice day and after climbing one peak I was introduced to the ancestors of Wuyishan. (The name I gave them, not the official name). More research will be done into these three, but it seems like there was a father who is credited to creating roads in Wuyi and then his two sons, one of whom seems to have a relation with tea.

Flash forward to later that night; I am sitting at the table of a tea of a guy who looks he could be the comic relief of an action film. A goofy smile always sat on his face, sometimes with a cigarette partruding from his mouth. He would have come of a little goofy if it wasn’t for his confidence and the soft power in his pouring, What really caught me off guard though was how good his tea was. 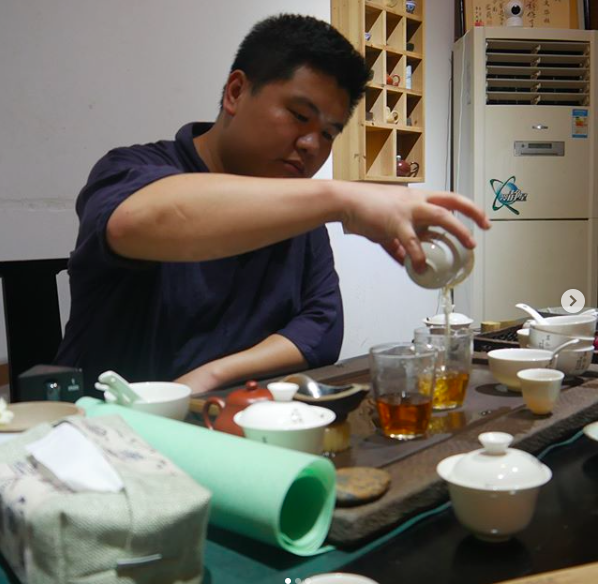 When I had first sat down they were just finishing a tea. They poured me a cup and I gave it a taste. While it was clearly toward the end of the pour, the roast notes had faded to a orange caramel flavor, what stood out was the plumpness of the tea. The juiciness and fullness of its flavor was still strong even after the other flavors had faded. This tea was good at its core. Some teas can have good notes, or a good roast, but lack a good foundation and therefore fail fast; this was not one of those teas.

They then switched to a new tea, Ba Ji Guan. Ba Ji Guan is a light roasted teas that I have seen a few times but only tasted once, and I wasn’t impressed by. This time I tried to keep an open mind because I trusted this maker and I knew what ever flavor was produced was the intentional favor. With this open mind though I was still caught off guard. The roast on Bai Ji Guan is very light, lighter than a Qi Lan. This sent an automatic response off in my brain that it was under roasted and therefore flawed. I quieted this voice down and we continued to drink. He told me that the desired flavor of Ba Ji Guan is that of chicken soup. I began to see what he meant, but still fully couldn’t understand the flavor. It only took me a few days, in a house in Anxi, to suddenly get a craving for the Bai Ji Guan and understand the appeal of that tea.

I stopped by his shop a few days later to buy some tea. I bought his Da Hong Pao for a great price. I asked him if he was still roasting teas now. He said yes and asked if I wanted to see.

We got in his car and drove for a few minutes, just outside the city center and then walked up a short dirt road to a house that looked slightly older than the rest of the area. (a lot of it was still made out of wood).

We walked in just as the roasters were flipping the tea.

The tea flipping step is one of the last steps to making yan cha. It happens during the roasting process which is done to preserve the tea, give the tea extra flavors and aromas, and cover up or fix any mistakes in the making. It is an intense processes where the workers must take each basket of tea off the hot coals turn them over and put them back on to ensure all sides of the leaves bake evenly. The room is scorching hot. The coals themselves are in the 200c degrees. Once the tea is flipped the workers go outside the room, close the door and wait for about an hour before they flip it again. This process is extra difficult in August (the normal time for the second or third roast) because the outside temperature is nearly 100f, so worker really get no break from the heat. 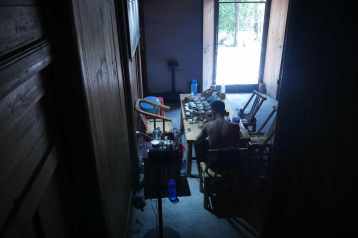 We went back to his shop and I bought a little bit of the Da Hong Pao which is available here.

I will go back to Wuyi Shan in November. On this trip I made a few friends who Im confident will make the trip more meaningful and productive.